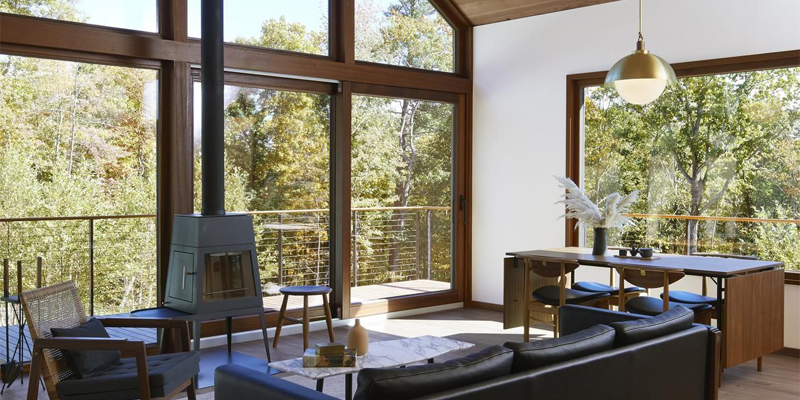 House Tour: A Chic Zen Home in the Woods – WSJ

by Catherine RomanoTHE DÉCOR TASTES of spouses can be antagonistic. Not so the pair who commissioned Manhattan designer Magdalena Keck to complete the interiors of their young family’s weekend home in Hudson Woods, a community in Kerhonkson, N.Y. The wife craved the aesthetic of her native Japan, while the Midwestern husband gravitated toward Danish modern furniture—unusually compatible ingredients. Referring to Scandinavian design’s straightforward construction and lack of ornament, Ms. Keck said, “Those midcentury designers reached back to Japanese design [whose] goal is clean simplicity and elegance.”

A unifying factor in the project? Oodles of wood. The house itself, by Lang Architecture in New York, had already prioritized another key precept of Nipponese beauty: local materials. White oak, plentiful in the Catskills and on the property, clads the walls, floors and ceilings. Ms. Keck made even more use of the humble lumber. “We did a ton of built-ins—walk-in closets, shelves, desks, bunk beds—that all seem to be growing out of the house because we used white oak where the architect had.”

The built-ins contributed more than soothing continuity. “We spent a lot of time on organization, to eliminate any possibility of clutter,” said Ms. Keck. “A Japanese interior is quite serene and sparse.” Walnut inserts in kitchen drawers, for example, house every utensil in its own special place. Besides wood, she sought out neutral, textured materials: handmade wools, linen, leather, rattan, unpolished brass that will graciously patinate.

Huge windows let the family devour nature; the surrounding landscape goes unchallenged by distracting interior color. “We wanted to appreciate the forest outside that changes pretty much daily,” said the designer. Thanks to the home’s seclusion, views aren’t cramped by window treatments, except the blackout shades installed in the bedrooms for morning slug-a-beds. 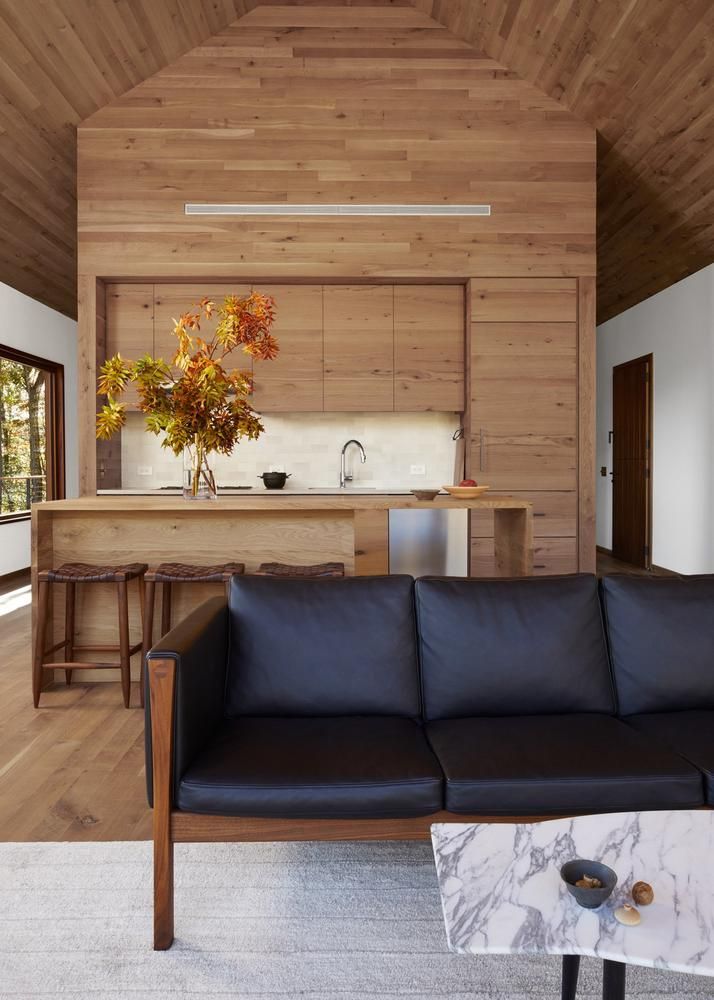 Barely There Kitchen
In the kitchen, the wall, ceiling, cabinets and refrigerator, all cloaked in white oak, came courtesy of the architect. “We contemplated a very beautiful sort of refined-industrial island, but it was rejected,” said Ms. Keck. “It was quite open and the client didn’t want to have kitchen things visible from the great room.” Instead, the designer had an enclosed island built, its wood veneer matching the existing paneling and cabinets. Backless bar stools by local furniture maker Michael Robbins joined the scene unobtrusively, and tiny fixtures hang from the ceiling. “We have a substantial lamp from Allied Maker above the dining table,” said Ms. Keck, “and one strong lighting piece in a space like this is plenty.” 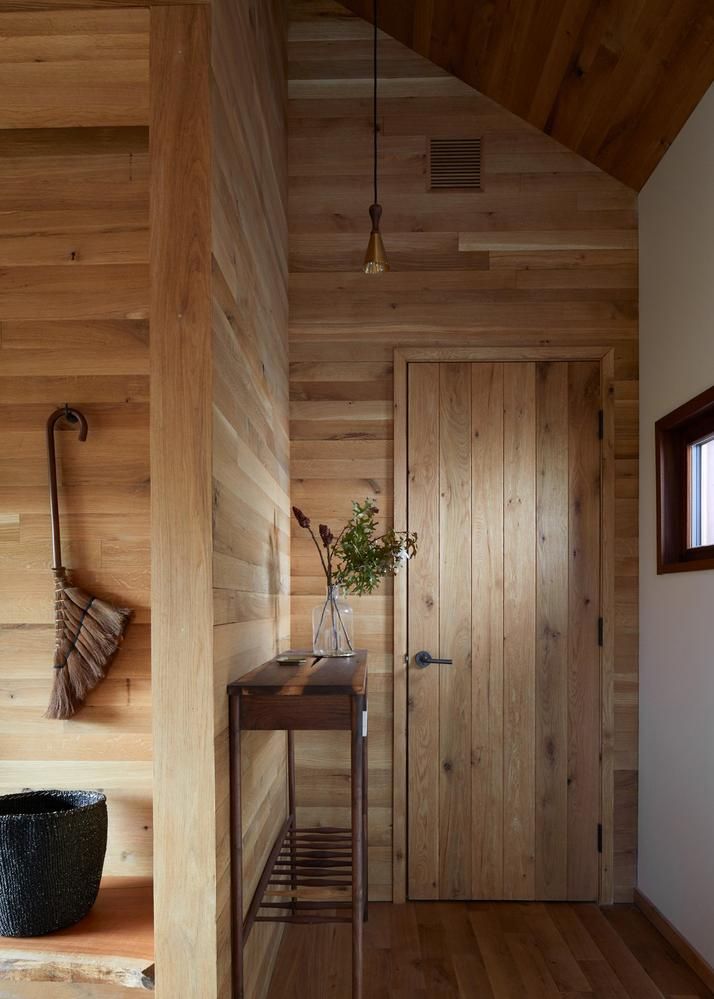 Unforced Entry
“Part of the Japanese philosophy is using what is available close by,” said Ms. Keck. So in the entry she chose a console created by Catskills furniture maker Samuel Moyer. A vase holds green oak branches and sumac foraged from the property. “This is what is always in the house, not props,” said the designer, “very organic and natural and easy.” On an adjacent wall hangs a Japanese broom, used for brushing cobwebs, bee nests, bugs and dust off the house exterior. “The clients brought it with them.” Filling their mandate didn’t mean finding specific objects that relate to the couple’s heritage. “Those that we did use are completely functional and inherent to the way the house is used.” 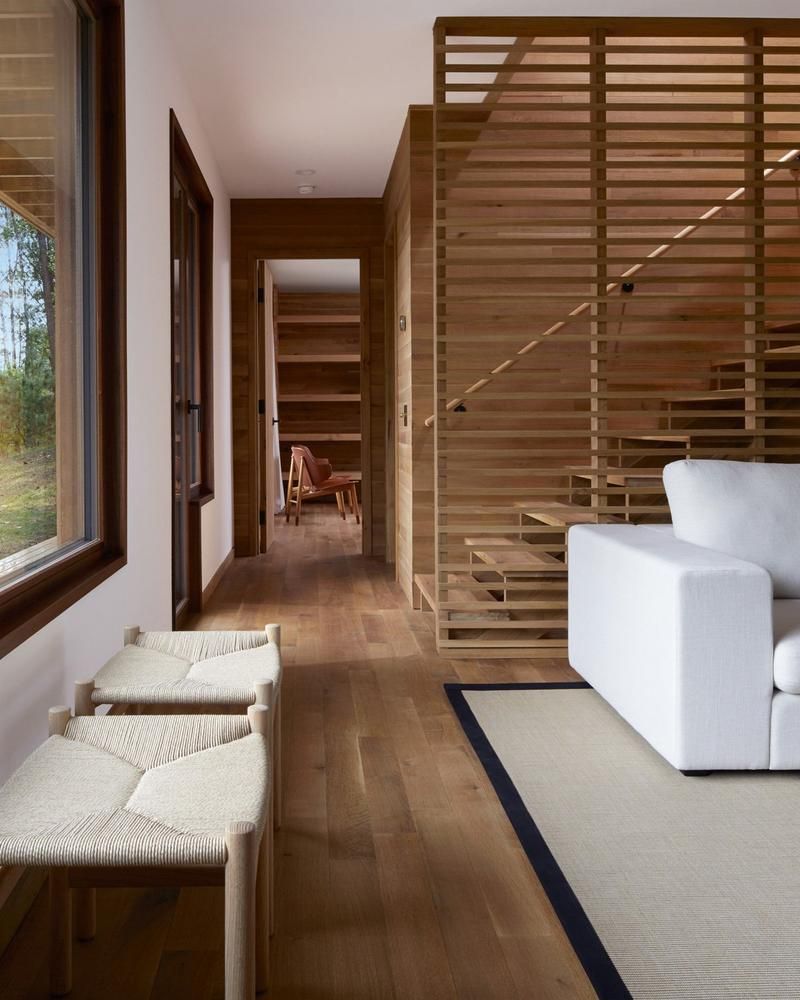 Get in Line
In the children’s bedroom, seen at the end of the hall, Ms. Keck installed white oak shelves against paneling of the same material and thickness—one of the many moves she made to maintain continuity. And from the perspective of the living room, where the family watches TV from the comfort of an Article sofa, the shelves visually echo the slats of the stairway wall. Created by the home’s designer, New York’s Lang Architecture, the transparent divider adds to the spaciousness and showcases the steps. “To me, stairs are by nature always really interesting, beautiful objects, a sculptural element,” said Ms. Keck. A pair of Hans Wegner stools offers an organic touch. The seats are woven from Spanish paper cord but have the same grassy quality as caning or rush, she said. 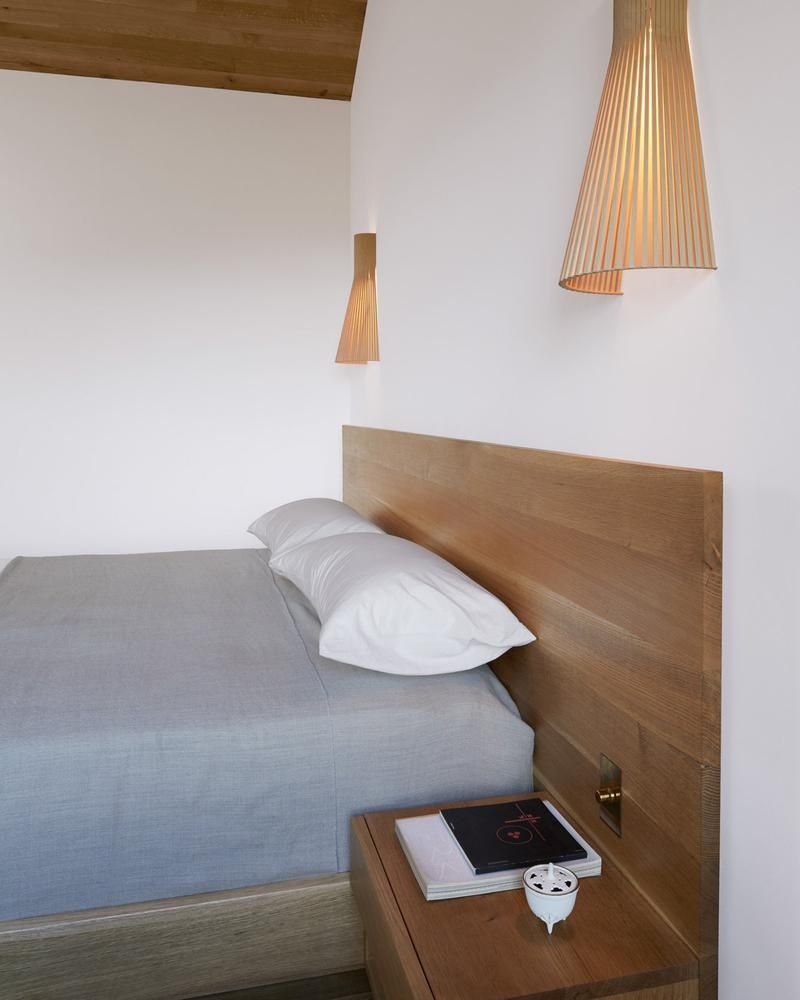 Master Craft
In the master bedroom, a white oak headboard with integrated night stands, by Oregon’s Chadhaus, continues the home’s celebration of natural materials. “We asked the maker to select boards that had the light streaks of sap, which really highlights the beauty of this common material,” said Ms. Keck. Finnish brand Secto’s fixtures emit light through strips of wood. “That reminds me of the screen downstairs, in an intuitive remote way..” 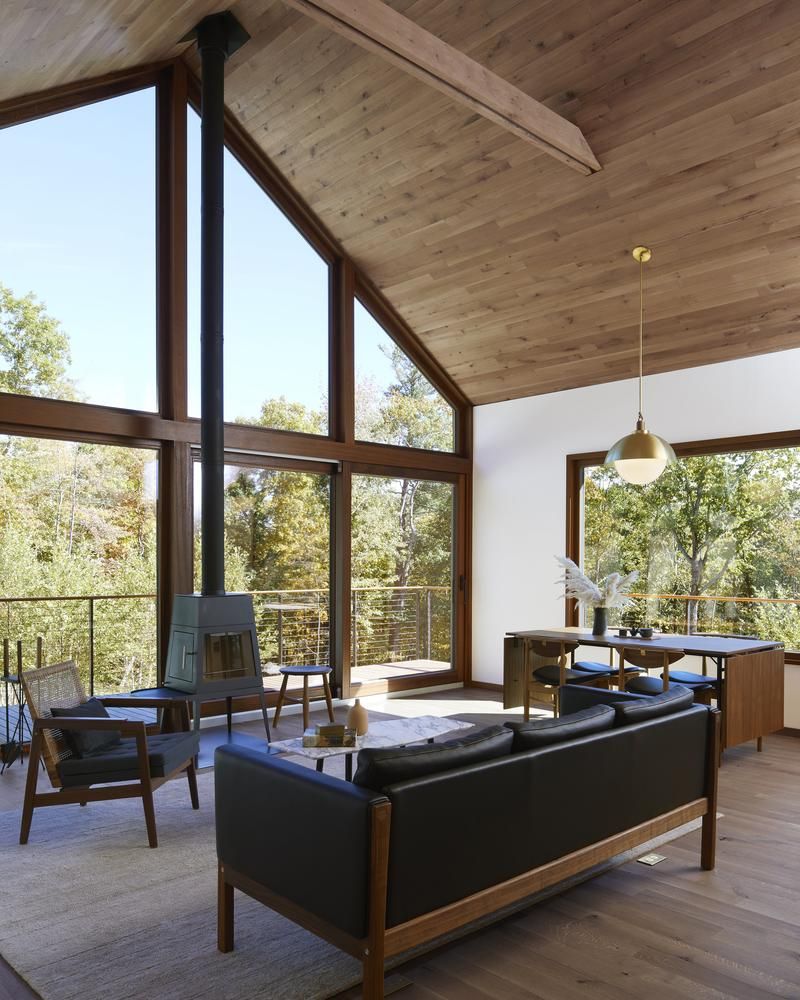 Cathedral Feeling
In the great room of the 3,000-square-foot house, low, horizontal midcentury furnishings get out of the way of the views: a dining table from Finn Juhl and a walnut Hans Wegner sofa, whose black leather connects with the bark of the trees outside. A rattan armchair is the only truly vintage midcentury piece in the room. Ms. Keck selected it in keeping with the Japanese philosophy of cherishing and reusing things. All of the furnishings stand on bare legs, which reinforces a sense of vastness. The negative space under these pieces, she said, “adds to the volume of the open space [and] makes the room even more grand.”